I don’t have a hero.

Posted by funkmon on January 18, 2013
Posted in: Uncategorized. Leave a comment

This is Penn and Teller. Penn on the left, Teller on the right. This is a recent picture, as Penn is wearing a wedding ring, and he hasn’t been married that long, comparatively. Penn and Teller have been together 38 years. This is Richard Feynman. This is a picture from the 1960s, about when he won the Nobel prize in physics.

This is Adam Carolla. He makes funny jokes, and has hosted a few radio shows. He’s offensive, but he genuinely cares about people, his fans, troubled youths, and getting people to understand things with humour. There is a reason Loveline was such a highly rated show.

Most of you who know me know I mention these people with some regularity, and what they’re doing. My mom will call me if any of them are on TV, and I’ll usually watch. I appreciate Penn and Teller because we agree on almost everything. Richard Feynman got me into physics. Adam Carolla made me appreciate comedy and improv. These people (only three of whom I have ever met, and even then, only a few times) have been instrumental in my life so far, and I bring them up when something they do may be relevant or interest someone else, and I don’t have anything about them on my webpage. 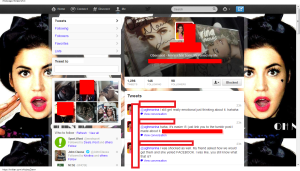 This is my ex girlfriend’s Twitter account. The person she’s obsessed with at the moment, Marina Diamandis, is a girl who makes music. Not good music, either. Bad music. This is all she talks about, and all she does. I don’t understand this. And if you think this is crazy, you should see her Tumblr page.

I’ve created my own life based upon things I enjoy, and include other things in my life based upon how much I like them. I have a purpose, and a goal, and don’t need anyone to control or overtake my activity.

Holy crap, this is on a computer. There is no physical record of this anywhere. Astonishing!